It’s a beautiful day for a special event. The sun is out, and the high is predicted to be 85ºF. Organizers have taken everything into account for a fun and safe experience. Upon entry, ticketing staff encourages people to wear sunscreen and a hat and to visit the hydration stations regularly. The medical tent is centrally located, well-marked, and well-staffed. Security and volunteers are trained in recognizing signs of heat distress in attendees. Everything is going great…until the music starts and people rush the stage.

With the density of the crowd, eventually, people start showing signs of hyperthermia. The symptoms are sudden; once people start succumbing to them, they are hard to identify and extract from the crowd. And unless treated quickly, symptoms can potentially be fatal.

Sickness and fatalities at an event can also result in fines, lawsuits, and/or permanent shutdown of future fairs and festivals. Any experienced organizer will tell you it is nearly impossible to prep for the individual medical needs of thousands of people. However, using a strategically placed Outdoor Cooling Mist System that lowers the temperature of the crowd can help mitigate some of the liabilities and potentially enhance the production and stage environment.

CROWD COOLING AND THE PENGUIN EFFECT

In an article originally printed in the medical journal Accident and Emergency Nursing titled “Crowd Physiology: the ‘Penguin Effect’”, Dr. William Blows points out that penguins use crowding and heat dynamics to survive the cold. These same conditions cause serious illness and fatalities in humans during crowded concerts on hot days.

A human’s normal body temperature is about 98.6ºF (37ºC). Any body temperature above 99º-100ºF (37.2º-37.7ºC) is too warm. Temperature regulation works differently in every person’s body and is based on a series of factors, hydration perhaps being the most important.

Heatstroke can be treated initially on site, but for the most part, is a medical emergency that requires a hospital. Some people with certain medical conditions or who are above 65 years old can be more susceptible to hyperthermia. People who have consumed alcohol or certain drugs can also be susceptible and may be harder to treat as a result.

Common on-site treatment might involve immersion in cool water, applying ice packs to the neck, groin, and armpits, or employing evaporative cooling by misting the patient with water and blowing air across their body. Hospital treatment might include cooled IV fluids or a cold-water lavage that washes out body cavities with cold water.

However, treatment doesn’t guarantee recovery. For example, the Hajj in Saudi Arabia is a Muslim religious pilgrimage that attracts up to 3 million people. As part of the ritual, people densely crowd (8–9 persons per square meter/yard) around specific sites for 5 days. Summer temperatures in Mecca are very hot and reach 104°F (40°C) in the afternoon, dropping to only 86°F (30°C) in the evening, offering little relief. A study in 1985 tracked 2000 people seeking emergency medical services for the treatment of acute heatstroke. After treatment, more than 1000 of them died within days, spurring closer scrutiny of the medical treatment and available services for hyperthermia at the historical site.

For an outdoor concert or event, a single death can be tragic and lead to public outcry, unfavorable media attention, more stringent permitting requirements, potential lawsuits, and higher insurance rates. All of these raise the cost of operation for future events.

More and more, permits for events are dictating specific measures to protect patrons. These are issued by local municipalities and can contain temperature-related provisions. That means, if the weather conditions reach a certain temperature, measures must be taken by organizers such as:

Insurance for events can be expensive. Hyperthermia is categorized as a “Third Party, Non-Employee Bodily Injury,” which can expose the insurance company to liability. This can have an impact on premiums and deductibles, and a single injury incident leading to a lawsuit could raise insurance costs in the future. It’s up to the provider and the underwriter, but affordable heat control to mitigate hyperthermia liability could help manage insurance costs.

Many event organizers are showing regulators and insurance adjusters their commitment to the safety of patrons by implementing high-powered atomized mist crowd cooling technology.

A study that was published in Applied Energy, titled “Water mist spray for outdoor cooling: A systematic review of technologies, methods and impacts” examined the effectiveness of fine atomized mist for crowd cooling as opposed to having the event in proximity to a body of water. Researchers concluded that fine mist protects crowds and mitigates some of the harmful causes of hyperthermia.

The study says, “Fine water spraying (termed micro-mist or dry-mist), in place of surface watering or sprinkling, guarantees total or almost total evaporation immediately after the injection, with minimum water usage and wetting risk at pedestrian level. Indeed, smaller droplets i) spend longer time being airborne due to the frictional forces, and thus evaporate faster, ii) tend to rebound rather than break, without adhering. Furthermore, sprayed mist expels dust and pollen, repels insects, and attenuates solar radiation in the long wave ranges of near-infrared and mid-infrared: fine droplets (tens of microns or less) are especially effective against harmful UV radiation. Such a fine pulverization is typically attained through atomization nozzles at high water pressures or ultrasonic methods.”

It goes on to say, “These systems have an edge over water bodies or surfaces, too, since evaporation can still efficiently cool the air down when air relative humidity is relatively high which explains the interest and the application of such a technology in humid countries as well.”

In short, having an event next to a body of water can help cool a crowd, but using fine mist has significantly better results, because it travels long distances over the crowd, cools the air above as it evaporates, and reduces the amount of harmful UV rays.

Giant open-cage fans on the sideline of sports fields or misting bars attached to the truss of the stage during concerts are not adequate to cooling large crowds. There are essential elements a technology must have to properly provide large crowd cooling.

The KoolBoss® has a spray manifold on the front end of a heavy-duty barrel design with a powerful internal 7.5 horsepower ducted fan in the back protected by a safety cage.  The cannon propels a long cone-shaped plume of engineered mist as far as 100 feet (30 m) through the air. Attached to the manifold, specially designed atomizing nozzles fracture pressurized water into millions of droplets approximately 50-200 microns in size that are light enough to travel long distances on ambient air currents. As the droplets move through the air, they evaporate -- beginning with the smaller sizes first -- significantly lowering the temperature of the air.

The misting cannons have a 0-50º vertical adjustment with an optional oscillator of up to 359º that allows a single unit to cover 31,000 square feet (2,880 square meters), or approximately half of an American football field. Mounted on a wheeled carriage, the KoolBoss can be easily moved throughout the festival grounds and pointed to areas of need. Hoses can be connected to hydrants or municipal water spigots using a standard 5/8” (15.80 mm) garden hose and a booster pump.

HOW DO I POSITION MIST CANNONS FOR EVENTS?

The number of units needed to accomplish a comfortable and safe atmosphere depends on the size of the crowd and the area. Organizers have found success in placing two units at either side of the front of the stage to offer cooling in the densest parts of the crowd.

Production teams who use KoolBoss units have reported that crowds tend to gather around the units for more mist and airflow. Event organizers in the past have successfully placed cannons in the center of the crowd, but we don’t recommend that. Positioning cannons on the outside of the crowd rather than in the center has several benefits.

In open-air stadiums, periphery cannons can also be turned to cool crowds sitting on the bleachers in the direct sun. 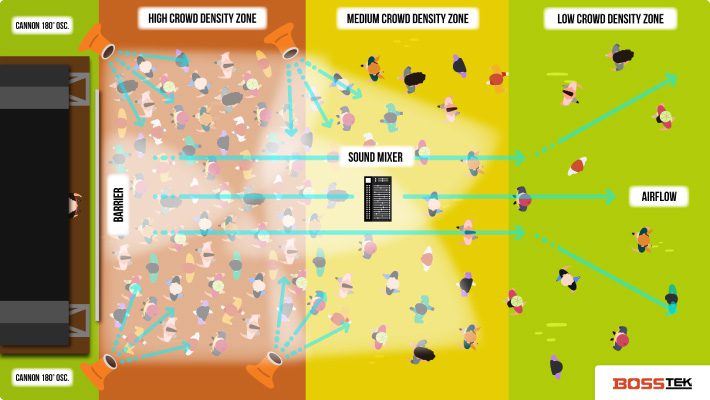 Things to consider when placing cannons:

The comfort and safety of attendees is paramount, but it’s also about delivering an overall great experience. Ticket buyers return for the good music but may opt for one festival over another due to comfort. This also applies to performers and event staff.

Implementing an outdoor cooling mist system helps create an experience that can't be forgotten. Events in large tents and smaller stages can just as easily have cases of hyperthermia, so BossTek also has small indoor misting cannons that do not saturate an area with water and provide superior air circulation.

Every event is unique, and BossTek specialists have guided dozens of production teams through successful events, so Contact them today to discuss your best options.  (Be sure to tell them you found out about them on FESTIVALNET.COM!)